In this section I’d like to introduce the idea of the Performance Pyramid by the US Physical Therapist, Grey Cook. This model is activity agnostic, but gives a structure that any teacher can use to assess students, and plan their training appropriately.

The pyramid is made of 3 sections, and the coaching begins with assessing the foundation, and building upwards. The sections are movement, performance and skill. An optimal pyramid would look as follows:

The sections are defined as follows:

A similar approach can be found by another leading US Physical Therapist, Kelly Starrett, whose book Supple Leopard indicates 9 fundamental positions used in human movement, that should be assessed by every coach to understand how to start training an athlete. Let’s stick with Grey Cook’s model, and delve a little deeper.

The movement foundation is assessed with a structure designed as the FMS (Functional Movement Scoring). The coach takes the athlete through a number of basic movement patterns, scoring them between 1 and 5 in competency. This will indicate where an athlete needs to improve, or is potentially most at risk when stressing the body during activity. The scoring can then be used to track future progress. The system has a number of exercises to improve these basic competencies (see https://www.functionalmovement.com)

The performance tier of the pyramid can be assessed in various ways. Measuring power by throwing implements, or strength with a one rep max in the gym are common methods. Beep tests, vertical jumps, broad jumps, sprints, timed runs are all used in professional sports. A key point here is that movement integrity is not compromised in these tests.

The skill element of the pyramid is an assessment of the performer in their chosen discipline.

Obviously each individuals pyramid will be different, and changing over time. Though I clearly wasn’t assessed in this way (or in any way!) when I began Capoeira, I’ll take a guess at mine.

I clearly had very little, if any skill as I began Capoeira training. Being twenty years of age, I had some semblance of strength and general fitness, but my movement capacity was extremely limited.

Here is another estimation of my pyramid a few years later, when I had chosen to overcome the ever growing injury history by increasing my strength and general fitness further.

I was fitter, stronger and more powerful than before, and with all my training, my basic movement and skill level had also improved, but as I hadn’t addressed the fundamentals of movement, I was on the shakiest of foundations. My Capoeira was being constructed on an extremely fragile base, and the inevitable result was poor progression, constant pain and a list of medical bills.

Taking the idea of an assessment for new students, and ongoing assessment for current students, makes a lot of sense for contemporary Capoeira. Irrespective of a teacher’s style, the art is extremely physically demanding, and the range of backgrounds seen in students is extensive. Irrespective of whether a student has a background in a related movement discipline such as dance or gymnastics, it is highly likely their movement and performance tiers will need to be improved over time to layer on the skill elements.

It’s Capoeira’s demands that make me suggest further elements be added to each tier. The foundational tier should include the basic movements seen commonly in general testing, so:

However the transition between these movements is so fundamental in Capoeira, this should also be assessed.

How formal an assessment should be I’d suggest is the teacher’s prerogative, but of course assessment on its own without intervention is a battle already lost, and the teacher should be using appropriate techniques to address any issues. A key aspect here is the individualization that this approach encourages, as each student has their own assessment, and program of interventions. The key times in a lesson to address these things, such as warm-ups and cool downs are often spent in group activity, or following one set of instructions, losing an opportunity for individualized training. This will often cause those with fewer deficiencies to thrive, and a lack of progression in those who need a more individual approach.

Once an individual has been assessed, the next phase will be to increase the student’s movement potential. As noted before, the use of exercise such Gymnastics, cross fit and gym work, has certainly increased the power and strength levels seen in Capoeira. Other core fundamental basics such as co-ordination, balance and rhythm are often left to the training of the art itself to provide. I think ignoring a specific focus on these is a mistake.

In recent years a number of ‘natural movement’ researchers and practitioners have used the internet to share their findings, and create awareness of their work. Famously Ido Portal moved from the Capoeira world to a more generalized movement space, creating his ‘movement culture’, where no specific practice was at the centre. Likewise groups such as MovNat and Animal Flow have delivered workshops around the world. My own experience of these movement workshops comes more from the Fighting Monkey group.

Though hard to explicitly define, the Fighting Monkey team has created many tools of practice, looking for longevity in the bodies joints, so participants can enjoy whatever practice in which they engage, for as long as possible. The training promotes co-ordination, rhythm and body awareness, whilst interacting with changing, and often, chaotic and playful environments. Elements of their practice have been taken from a wide range of disciplines, such as Martial Arts, Chinese medicine and an assortment of Dance.

The co-ordinations practice is particularly interesting from a Capoeira perspective. Dance such as Makulele, or more recently types of African Dance, have been used within the art as part of shows or demonstrations, as well as training for co-ordination and rhythm. However the practice is often sporadic or seen only in workshops, rather than part of the weekly schedule. Fighting Monkey’s co-ordination work is seen as fundamental to healthy, functioning movement, whilst encouraging elasticity and connection throughout the body. The sequences allow a student to learn to organise their body in space, whilst bringing awareness to proximal to distal patterns, and balancing around the changing axis of the body.

Their work with the ‘practice ball’ (a tennis ball on a string), also encourages efficient, fundamental movement, with exercises designed to bring challenges and creativity to the student. These exercises are also a perfect assessment tool. Moving from a static poses, to a more dynamic picture of how someone is moving, and highlighting where potential problems may occur.

Body awareness and efficient movement patterns can also be explored with practices such as contact improvisation or Feldenkrais. Both of these practices take the onus away from the teacher, and on to the student to feel and develop as an individual mover. This is an aspect I’ll look at more in the part 4, but advancing an internal awareness of movement in all students can be enormously helpful in healthy development.

A further benefit of such disciplines is the use of variable scenarios and environments. Both Fighting Monkey games and contact improvisation allow students to explore their movement whilst interacting with changing, and sometimes highly chaotic environments. Though the movements may not reflect a Capoeira game, these allow a student to learn to move whilst interacting with changing conditions. We shouldn’t underestimate the benefit of allowing individuals to explore in this way, as it can help with the psychological understanding of the interaction in a Capoeira game, as well as promote confidence in the mover.

These are a few examples of how we can increase the pyramid base. Moving away from group static stretching or basic Capoeira movements done individually, to help students explore and expand the fundamentals of good movement; moving with rhythm, co-ordination, balance and elasticity. By looking at research, using play and being creative with different disciplines, it’s possible to open the teachers toolbox, highlight, and then help the students lay a strong foundation for future specific skill requirements.

This section could be an article in itself, but I’ll keep this brief, with a few observations.

As noted previously, modern Capoeiristas are using various methods to help with gains in strength. Some teachers see this as being a core part of a regular class, and others may simply advise students to head to the gym in their own time. A key consideration is to consider appropriate levels, and types, or strength for a player’s own body and style. Where possible, strength training should be as individualized as possible.

Firstly when is a student ‘strong enough’? The same question is often posed in Athletics, when extra strength gains may be critical for some athletes, and have significant diminishing returns for other. It’s therefore clear that this depends strongly on the individual, their current status, and their goals. Take my own case again. A focus on strength gains to avoid injury came at the expense of using that time more wisely on improving essential movement patterns.

The type of strength trained is a key consideration for Capoeira. Anecdotally something I have seen a lot is the use of typical strength exercises (press ups, sit ups etc), with apparent minimal consideration with the aim for the students, and their own Capoeira. One good example is the excessive use of concentric strength training. Groups that prefer certain types of style or ginga, may wish to increase concentric strength, but it can also lead to a slowness in the player, as they sink in their movements, unable to resist downward force.

I think the Cordao de Ouro group is an example of specific strength training impacting style. The use of ‘mata-barata’ and jumps in the ginga, is a form of plyometric training, helping players to develop eccentric strength, and be explosive in movements. In Ceara, the students use skipping ropes to improve jumping ability, and can often be seen jumping on the states sandy beaches. This training can be likened to a sprinter or long jumper, with short contact times with the floor, but powerful movements. This may not be what a teacher is looking for, but demonstrates how regular specific strength training can develop the physicality of the players within a certain style. 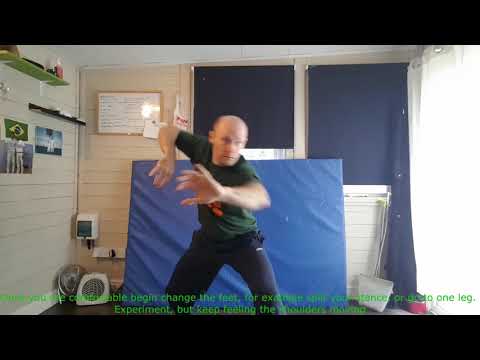